Motorola has a line of IMPRES chargers and batteries to help extend the life of your battery, giving you longer runtimes and better charges. The charger will show different LED lights telling you what stage of charge your battery is in.

In this article, we’ll talk about what each LED light indicates and explain a little more about IMPRES.

What does IMPRES mean?

IMPRES batteries by Motorola are designed for simple, reliable care and are equipped with an innovative charging system that when paired with an IMPRES charger, reconditions the battery, extending its life.

The reconditioning batteries are meant to restore it to its normal full capacity. During a recondition, the charger will fully deplete then recharge the battery to eliminate the memory effect. 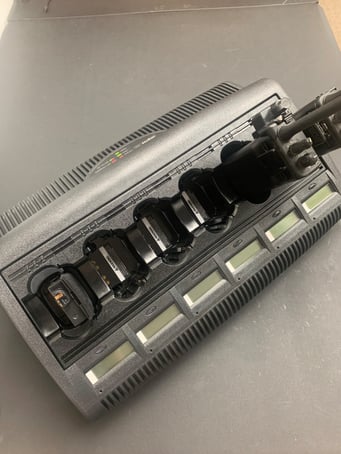 Benefits of IMPRES Batteries and Chargers

IMPRES reduces the amount of work you have to do with tracking your battery use. All you need to do is place the battery in the charger and remove the battery when done.

Using an IMPRES charger with an IMPRES battery helps,

What do the Steady Lights Mean on an IMPRES charger?

When using your IMPRES charger, you’ll notice a few different LED lights. Motorola IMPRES charger lights indicate what cycle the battery is in its charging process.

Below is a list of what each solid LED light means on an IMPRES charger. Flashing LED lights, which may be a problem with your battery, are reviewed next. 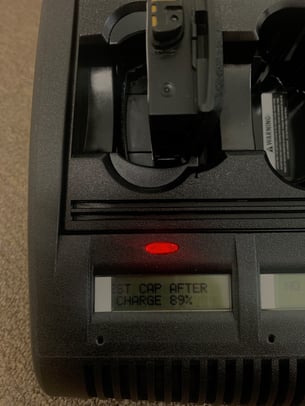 What does the FLASHING light mean on an IMPRES charger?

Your IMPRES charger may flash different colors of green, orange, or red. This may mean your battery is just completing its charge time like normal but other LED flashes may be a warning to the state of your battery.

Below, is a list of what each flashing LED light means on your IMRPES charger.

IMPRES 1 vs IMPRES 2? Can I use the same charger?

Motorola now has two generations of IMPRES batteries known as IMRPES 1 and IMPRES 2. IMPRES 2 is known as their next-generation system that charges batteries 40% faster and at a higher capacity giving you more talk time. IMRPES 2 also lets you charge 60% more times than a standard Li-Ion battery.

Check your manual to see if your battery is supported with your charger.

While operating your IMPRES battery charger, problems could arise. Below we will talk about each problem and what to do to get your charger working again.

Problem: Charger has no lights

What it means: Charger contact is not being made or there is no power to the charger.

What it means: Charger contact is not being made or the battery is not chargeable.

What it means: IMPRES Battery is waiting to charge. This could mean your battery is too cold or too hot that it’s making the battery voltage too low for the charge to start.

What to do: When the temperature of the battery is corrected, charging should begin.

You can either manually or automatically recondition the batteries.

To stop the reconditioning process, remove and reinsert the battery within 5 seconds. This will end the recondition process and start charging. It should now show a STEADY RED light.

Below is a list of part numbers that are IMPRES compatible and will recondition.

Waveband Communications is a manufacture of OEM comparable two-way radio batteries and accessories. Waveband offers a line of IMPRES compatible batteries, and reconditioning chargers to get the most use out of your lifeline. Let us show you how to improve your two-way radio with reliable radio accessories.

Be the first to know when new blog posts go live and get exclusive discount codes and company news.